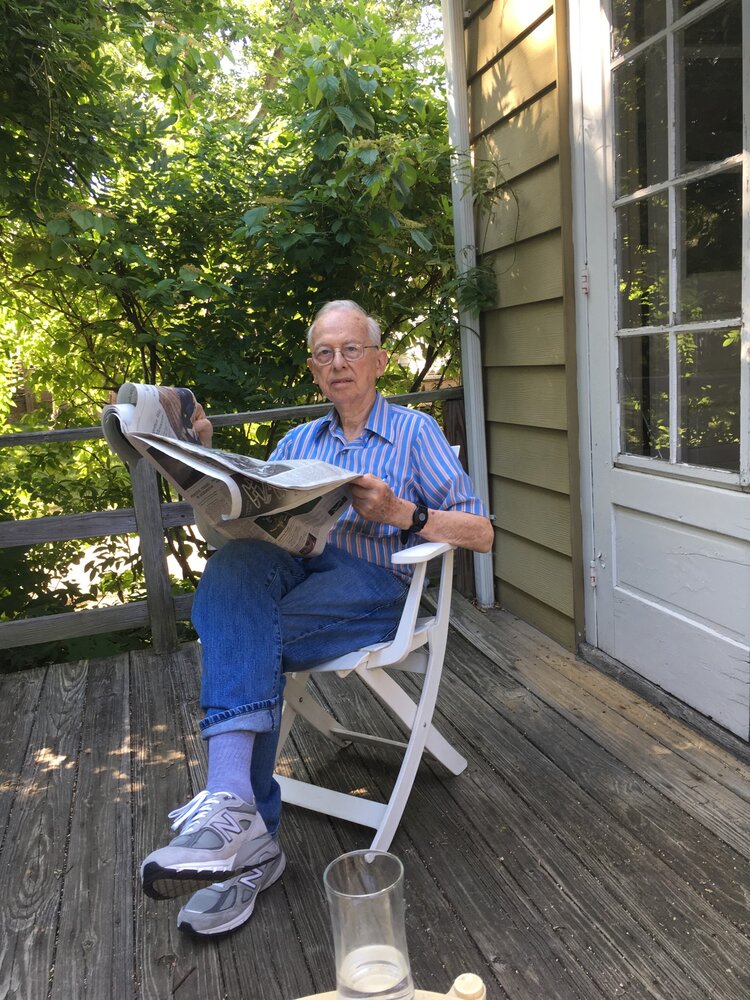 Please share a memory of John to include in a keepsake book for family and friends.
View Tribute Book

John Stanton Wilson was born in Beloit, WI. in September 1925. He was born to John Harlen Wilson and Esther Winslow Stanton Wilson, and raised on their farm in Hebron, Illinois. He was predeceased by his younger sister, Joan Wilson, who was born in 1928, and passed away in 1985. Joan was a well-known television producer for WGBH in Boston, MA. John, or Jack, as almost everyone called him, left farm life at age 20 in 1944 to enlist in the US Army, as World War II still raged on. However, he was fortunate enough not to be sent overseas to Germany until after the close of the war. He was stationed in Germany for about 2 years working in an administrative capacity before he was rotated back to the US. Upon completing his commitments to the US Army with an honorable discharge, Jack went to Grinnell College in Iowa on the US GI bill where he studied Liberal
Arts, History, and Finance. Upon receiving his undergraduate degree from Grinnell, he went on to get his master’s degree in history and finance at Columbia University in Manhattan. He met Clarice Marie Kelly at a summer college session, and they were married in Superior, WI., Clarice’s hometown, on August 14 th , 1954.
They then moved to White Plains, NY where Clarice got a job teaching music at the Rochambeau grade school, and Jack’s first job on Wall Street was for the Ford Foundation where he worked as an Investment Advisor. They had two children, Cathie Ann and John Kelly. Clarice and Jack purchased their first home in White Plains in 1960. And it was there that they both lived for the rest of their lives. Very soon after this, Jack and Clarice joined the Community Unitarian Universalist Congregation at White Plains, where they both remained members from then on.
Jack subsequently became an Investment Advisor for TIAA-CREF and later a similar position at the Bank of New York, from which he retired in 1990. Jack was predeceased by his wife Clarice, who passed away on June 3 rd , 1999. Jack was an avid bird lover, and took many walks to go bird watching, as well as putting bird feeders outside his home to attract the birds there. He also loved to travel and saw much of the world over the years, including Israel, Egypt, and an African safari trip to Tanzania.

Jack was also an avid fan of History and made clear on more than one occasion that if he could do things over again, he would be a college history professor. He would have been a great one. After his retirement, he attended many courses at SUNY Purchase. Jack helped many people in various ways throughout the course of his life. He
visited many sick and ailing friends and would run errands for them. He was known among all his friends as someone that they could always turn to if they needed a helping hand. In 2002, Jack met Ellen Fertig, who would become his closest friend and companion until his death in 2019. Ellen also became a dear friend to both Cathie
and John, and both consider her as part of the family. On June 28th, 2019, Jack passed away peacefully in White Plains Hospital after a brief illness. He will always be very much loved and missed.

Share Your Memory of
John
Upload Your Memory View All Memories
Be the first to upload a memory!
Share A Memory
Plant a Tree