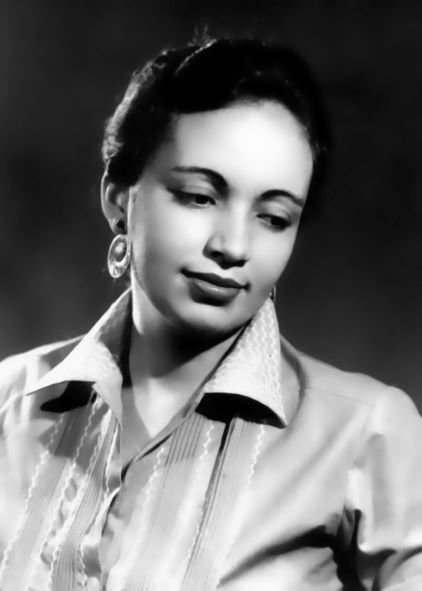 Please share a memory of Marie-Elaine to include in a keepsake book for family and friends.
View Tribute Book
Marie-Elaine Delince (née Viard) passed away peacefully in her sleep, on April 9, 2020, at home in Riverdale in an apartment she shared with her two daughters and a grand-daughter. With the help of devoted home-health care workers, the family was able to care for her at home. She was 88 years old. For many years, she had battled Parkinson’s Disease. Her husband, Kern Delince, to whom she had been married for 58 years, predeceased her in 2016. She was born in Port-au-Prince, Haiti in 1931, the youngest of four siblings: Denise, Collette and Daniel. The three Viard girls were known for their sense of style and were dubbed “the three Graces”. Marie-Elaine had a great sense of irony in her humor but was always tender in her approach to others. She loved fashion. Even during her waning last years, she took notice of what style, colors and fabrics those she came into contact with were wearing. While in Port-au-Prince, in the early 1950’s, she along with her sisters opened a showroom called Magie de Femme where they would present their seasonal collection. Her father, Justin Viard, M.D., was a pediatrician and educator who had written several textbooks used in grade schools throughout Haiti for many decades. Her mother, Christine Doret, was the daughter of Frederick Doret, who was a delegate to the League of Nations and publisher of La Petite Revue. In 1958, she was introduced to Kern Delince, a Haitian Army Colonel and lawyer, by a mutual friend, and married the same year. However, in 1963 their new life together was abruptly shaken when Kern participated in a failed coup against the dictatorship of Francois Duvalier in 1963. The plot was well documented in Bernard Diederich’s book The Price of Blood: History of Repression and Rebellion in Haiti Under Dr. Francois (2011), as well as in her husband’s book, Quelle Armée pour Haiti? (1994). Marie-Elaine, had been kept in the dark about her husband’s involvement in the attempted coup. In early April 1963, while out shopping for shoes in Port-au-Prince, she ran into Major Bruce Magruder, who as a U.S. officer with the U.S. Naval Mission in Haiti, who counseled her to stay out of sight, because a plot against the government, in which her husband was implicated, had been foiled. On April 14, 1963, with the assistance of Major Magruder, the couple sought political asylum, under cover of night, at the Brazilian embassy joining other military men, who had been implicated in the plot and their wives. Her home was ransacked and emptied by the dreaded Ton-ton Macoutes. After six weeks of negotiations, the wives, including Marie-Elaine, were permitted to board a Pan Am plane headed for New York, with no money or papers to start a new life in the United States, where she remained until her death. Upon arriving in New York with her son, Patrick, Marie-Elaine soon realized that what seemed at first a temporary move was becoming a permanent exile. She needed to find a way to make a living, while her husband was still held up at the Brazilian embassy and her other children remained in a precarious situation in Haiti. She took a number of advanced courses in dressmaking and eventually was able to make a living working as a sample dressmaker for several designers, including the fashion house of Bianco. After several years of separation, she was able to reunite with her family. In 1992, she and her husband retired to Florida but returned to New York 20 years later be nearer to their children. She is survived by her son J. Patrick and two daughters, Marlene and Karen, and stepson, Jean-Robert, and their respective spouses, all of whom live in New York City. She is also survived by her beloved grandchildren and great-grandchildren, nieces, and two sisters in-law. A memorial service will be planned at a future date after the coronavirus pandemic has subsided. In lieu of flowers, the family requests that donations be made in Marie-Elaine Delince’s name to HACO (www.hacohaiti.org), a charity that supports education for vulnerable girls in Haiti.
Print